In recent years, the image of extensive development has completely fadedaway on China's cosmetics industry.Its technology-leading andgroup-operating concepthas brought prosperity to the whole industry.With domestic brands emerging in endless andnumerousforeign brands crowding in, the marketing competition will be more vehemence. Depending on its billion populations, China is becoming one of the largest cosmetics market in the world.

Therefore, CIRS would develop anintuitive and comprehensive analysis on the industry transformation based on the current market situation and statistics data of supervision.

According to the statistics of Euromonitor, the amount of retail transaction for cosmetics business was 293.7 billion RMBin 2014, which will be expected to reach 423 billion RMBby 2019with an 8% annual growth.Meanwhile, the market share of make-up, baby care and men's care will be increased in the next five years.However,the market share of shower, oral care and hair care will be expected to decline. Along with the increasing disposable income and risingskin care awareness, middle and high-end cosmetics will be popular.

The market portion of domestic cosmetics products in China is much lowerthan developed countries. According to the analysis from Chinese Products Information Network, onthe domestic market of US, Japan and South Korea, domestic brands account for respectively 74.3%, 80.6% and 84% amongCR30 brands. While in China, local brands account for only 22.2%.

As a matter of fact, domestic cosmetics brandstend to meet the needs of local consumers, the supply chain management would be more flexible, and its prospects shall not to be underestimated. 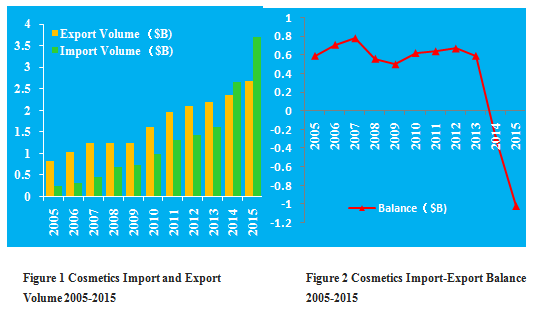 The growth of the import volume is intrinsically related to continuously decreasingtariff. Meanwhile, the appreciation of the RMB not only restrains the export but alsostimulates the consumption of imported luxuries.

Domestic cosmetics industry lacks of independent R & D capabilities and clear market positioning, which have adverse impact on the export of domestic products. The differences among national cosmetics regulations all over the world should be considered as prominent barriers for global business as well.

February 2, 2016, CFDA released Annual Statistical Report on Food and Drug Administration2015announcing that there were4542 sanitary permits ofcosmetics manufacturersin totalby the end of November 2015.

In order to further enhance the supervision ofcosmeticsproduction and ensure good quality of cosmetics, CFDA issued Notice on the Cosmetics Production Permit (2015, No. 265) on December 15, 2015. For those manufacturers who have National Industrial Production Permit issued by AQSIQ and Sanitary Permit of Cosmetics.

Manufacturers issued by provincial FDA, the licenses will expire on December 31, 2016. Therefore,all cosmetics manufacturers shall perform self-test and rectification as soon as possible in accordance with Key Points of Inspection forCosmetics Production Permit. 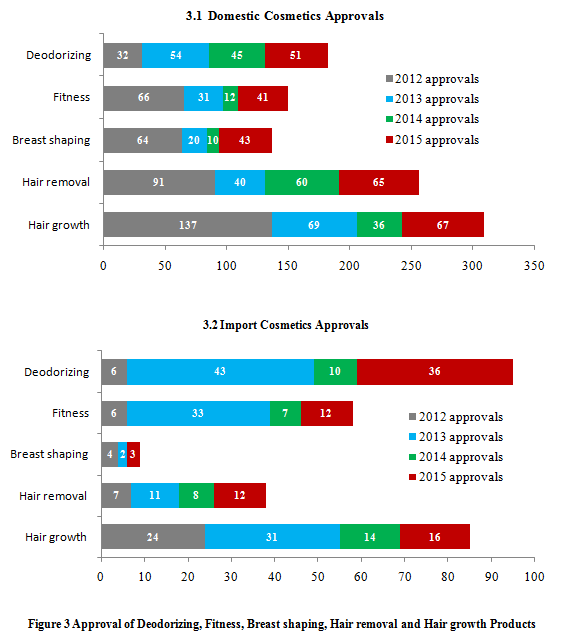 Among the categories of deodorizing, fitness, breast shaping, hair removal and hair growth, there are more approved domestic products than imported products every year. Since China’s cosmetic regulations are more complicated compared with other countries, it causes to moreobstacles for the registration of imported special use cosmetics.

The annual approval number of thoseproducts mentioned above is mainly depended on the market positioning of new product for specific manufacturers. Ifthe manufacturerdecided to promote a specificproduct, the approval numberof that certain category would have a significantly increase. Take deodorizing products for example,compared with the approval numbers 6 in 2012 and 10 in 2014, there were 43 in 2013 and 36 in 2015. This is mainly due to Unilever (Rexona& Dove) who registered nearly 20 deodorizing products each year in 2013 and 2015.

According to Table 3, the complaints’ number regarding cosmetics from local FDAs had dramatically increased from 2012 to 2015. The conflict between demand growth and shortage of quality products results in an increase ofincreasing adverse reactions. Besides, the risingconsciousness of consumer safeguarding rights would urge the manufacturer to strengthen the products’ qualitymonitoring as well.

In conclusion, the cosmetics industry has developed rapidly in recent years and the regulatory authorities’ have strengthened the quality control. Cosmetics regulations in China would be keptupdated and revised so as to makelegislative concept to adapt the development of situation.

Numerous drafts of cosmetics regulation were published by CFDA for comments in 2015. Cosmetics manufacturers shall keep updated with regulatory information to ensure that their products are compliant with the latest regulations. Prior to enter the China market, foreign cosmetics enterprises shall fully understand the relevant Chinese laws and regulations. Meanwhile, local cosmetics brands shall be compliant with the related provisions of exporting countries. On Jun 28 and 29 2016, CIRS will hold the Second Summit on Cosmetics Regulation in Asia-Pacific in Shanghai to provide a broad communication platform for cosmetics manufacturers. On the summit, there will be authoritativeofficials and expertsfrom home and abroad to present how the cosmetics or cosmetic ingredients are managed in safety under the local regulations,such as China, EU, South Korea, Japan, Australia and India, etc.