As one of the largest cosmetics markets in the world, new domestic brands keep emerging and piles of international brands contends to swarm into the China market. In order to ensure the quality of products and protect the legitimate rights and interests of consumers, CFDA puts its largest efforts ever in the supervision of the cosmetics industry.

Given all this, combined with the market’s latest development and statistical data upon supervision, CIRS comes with an intuitive and comprehensive analysis of the development of cosmetics industry.

By analyzing the moving trend of the year-on-year growth rate of the country’s cosmetics retail sales from January to December 2016, it can be concluded that although there were a few unfulfilling growth rates for certain months, the overall annual sales volume kept increasing. The bottom point of only 4% year-on-year growth rate in 2016 occurred in October. However, with the resumption of the growing rate in the coming months, the retail sales reached ¥22.7 billion in December with the year-on-year growth rate of 11.0%. Consumers’ interests in purchasing are greatly influenced by sales promotions in stores, online platforms and by brand owner companies. Their promotional events in certain periods lead to the unstable monthly growing rates.

According to the Related Analysis of the National Economy published by National Bureau of Statistics in April 2017, the total retail sales from January to April 2017 is ¥78.5 billion with a year-on-year growth rate of 9.4%, higher than the annual growth rate of 8.44% in 2016.

Figure 1, Comparison between Different Sales Channels for Cosmetics in 2010 and 2015.

Online trading has incomparable geographical and spatial advantages that traditional retail can hardly possess, plus the fact that young buyers are praising highly on online-purchasing these days, the dramatic increase in cosmetic sales through online platforms has then automatically emerged. Cross border e-commerce platforms which developed rapidly due to the low price barrier, have also contributed greatly to the online trading market. From the regional distribution of cosmetics online purchasing, 77% is contributed by the mid-class population in top and 2nd tier cities.

As one of the largest cosmetics consuming countries with extremely large population base, more and more foreign companies start getting their products into the China market. Furthermore, the cut in cosmetics import tariff has also favored their needs to import products to China. The increasing number of import products increase choices of consumers. Mid-to-high end cosmetics products are highly pursued by the younger generation, which further stimulates the market for import products. 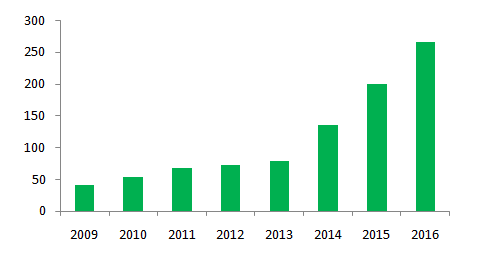 Compared to the rapid growth of the import market, the development on domestic market are experiencing a declining tendency, as popular foreign brands keep swarming into China and the fact that domestic products are trapped into traditional sales channels. Several domestic cosmetics giants started to face downward pressure on profit. In addition, most domestic small and medium-sized brand companies are lack of independent R&D ability and unclear market positioning, which have greatly influenced the quality of domestic products.

More than 15 million infants are born in China annually in recent years, and hundreds of billions are spent on baby care products each year. Data shows that the market volume for 0-3 year old baby care products has reached ¥7 billion in 2016, and the figure is predicted to be more than ¥15 billion in 2020, with the CAGR of 20%.

From 1st January 2016, any newly established cosmetics manufacturer can apply to the local provincial FDA for production license. Provincial FDA shall audit the manufacturing company according to the ‘Specifications’ and issue the Production License to qualified manufacturers.

At the end of 2013, CFDA issued the Notice on Adjusting the Management of Cosmetics Registration and Record-Keeping. The notice stated that whitening products are in the scope of anti-freckle products. The transition time for this adjustment was valid until 30th June 2015. Therefore a significant increase of the applications of special use cosmetics products has emerged since 2015. 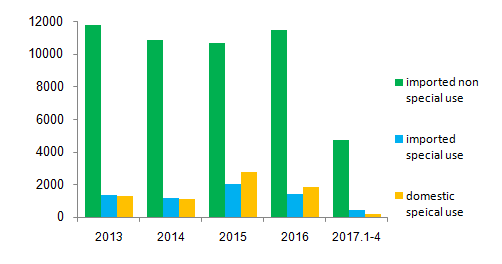 Figure 3, Data summary of approval import non special use and special use cosmetics from 2013 to 2017

From January to April 2017, CFDA has approved about 5,000 import cosmetics and 160 domestic special use products. 31st December 2016 is the expiration date of changing or renewing production license. Moreover, the Technical Safety Standards for Cosmetics (Please click here for more information about the Technical Safety Standards for Cosmetics) was implemented at the same time in December. Most domestic manufacturing companies are experiencing transitional period, causing the significant decrease in the number of applications.

In 2016, CFDA has carried out several tests for randomly selected commercially available cosmetics and has paid significant higher attention on sun-blocks, masks and products for anti-acne and anti-freckle compared to other products. In the first quarter of 2017, local FDAs have drawn up the work points on the post-market supervision of cosmetics in many cities and regions. The points are all aimed at monitoring the quality of products, and hence protect the legitimate rights and interests of consumers.

If you have any other needs or questions, please contact us at service@cirs-reach.com.